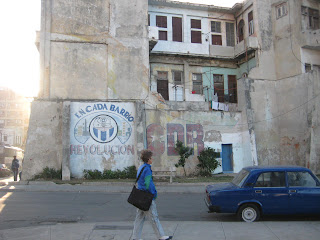 From the get go, I knew we weren't in Kansas anymore when we arrived in Havana. A city of intrigue, grit and very colourful characters.
A rough, vibrant city like Havana is something you have to swallow in one gulp and the ability to have no access to the outside world makes it very obvious that you have entered a form of twilight zone.
The first night was filled with restless sleep, first from Olga - the owner of the Casa Particulares I was staying at  - who had an assortment of Cuckoo clocks chiming every hour, alongside waking to the chaotic horns and breaks in the traffic and a man throwing up in the alley beside my bedroom window.
Havana is a rude awakening in every which sense of the word.
The second day was more inviting in Havana. More accustomed to the town we decided to do a guided tour of the city. We learned of the various invasions from the Spanish, English and American, the perspective of its modern history of revolution and learnt of the cities idiosyncrasies - its love of baseball against the backdrop of revolution and 900 terrorist attacks in its socialist history.
I learnt so much about the Cuban people that day. My preconceptions of a gritty, dirty and rough city replaced with a more empathetic understanding of its people and their tough exterior. I very much felt like an outsider and their were no reservations made as we walked the streets and were stared at time after time by the locals.
However looking back, how do I come to understand a country that could never have freedom or the choice to leave?
at Sunday, February 27, 2011